I have to apologize to the many good folks who have contacted me wondering where the restoration stands. It has indeed been a long time since I have updated the web site, though I have intended to do the work often. A mixture of other things to do and some technical difficulties (a new computer and lost digital camera, mainly) conspired to keep this year (!) of work on the car more or less secret. But things have indeed been progressing. It is likely (and a little weird) that this entry will be the only one in the sixth year of restoration.

It has been some time since the triumphant first start back in September 2008, but the time was not without events or work on the car. It turned out that somehow coolant leaked into the oil, a fact that I discovered to my horror when the oil cooler circuit broke and I saw oil squirt out with the color of well-creamed coffee. It looked luscious and rich, and it meant 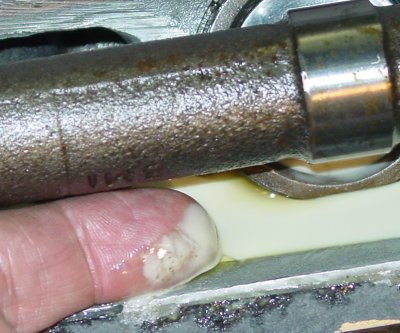 nothing but trouble. The first thing that I did — after cleaning up the considerable mess — was remove the oil cooler. I suspect that the lines were insufficient for the pressure, and they were going to cause trouble anyway.

But the cooler setup was not the cause of the leak inside, and so the weeks and months that followed meant considerable speculation and telephone calling. I was skeptical that the issue was a head gasket — the thing was brand new, after all — but the fact was that there had been occasion enough for something catastophic inside. The mistaken wiring caused a good deal of explosion (when the effect wasn’t just straightforward flamethrowing). And there probably was high oil pressure due to the craptastic oil cooler. So, I took off the head after many weeks of trying to avoid the job. The gasket was in fine shape, and I replaced it nonetheless. So much for premature head gasket failure.

How about the truth of the head and the block’s deck? The head was newly reconditioned, but the block was not. Both looked fine when tested with a straightedge.

Then I remembered, very vaguely, seeing a silicone worm around the timing chain cover. A search of my photographs came up with nothing, an obvious failure of documentation at the tear-down.

So, the water pump came off, and I probed at the interface of the timing chain cover and the block. I did find a point where the probe was “sticky” — as though it was poking into a very small hole. This hole pretty much corresponded with my memory of the worm. The fault must be in the timing chain cover, since I have a new block on which I fitted the original timing chain cover. I was of course presented with a situation of having to tear off the head yet again to remove the timing chain cover, or I could do what a previous owner had done. I chose to recreate the silicone worm. Next time the engine comes out I’ll be better about it.

I’ve not yet loaded up the car with fresh oil and new coolant. Who knows, I might be removing the head again anyway.

Assuming that the engine goes, I have to worry how to stop the rolling car. My initial plan was to recondition the original Dunlop master cylinders and front caliper setup (the original rear calipers are in place already). I had already cleaned up the originals, and I’d even plated the front calipers in anticipation of having the cylinders redone and new pistons installed. I was intrigued by the Volvo 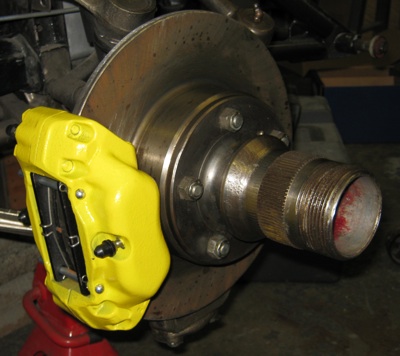 caliper upgrade, even though it went a bit against my desire to keep things pretty standard. The more I looked at it, though, the more it made sense to use the Volvo system. There is plenty of evidence that the upgrade works, there are some rather obvious advantages to it, and there is plenty of instruction on line.

“Sin boldly,” Martin Luther said, assuming that sin was inevitable anyway. So I sinned against the spirit of authenticity and adopted the Volvo brake calipers. I’ve done it boldly by painting the transgressions yellow. These calipers won’t hide, I’m afraid. But I do think they’ll stop better than the originals. The surface area of the pads and the pressure from the dual pistons will surely outmeasure the originals. It isn’t really all that bad, either, since these Volvo brakes were made by Girling, and Girlings were originally installed on many of our old E-types (just not these Girlings.)

Why yellow? Well, I’d seen a Porsche with yellow calipers and I liked it, and I do think the color makes no apologies for my “error.” I might be accused of being unrepentant!

I got “loaded” calipers — pads, retaining pins, everything — and they cost about $120 (USD). There is a bit of fuddling that is required and you have to make a decision about whether to “split” the caliper halves or not. I chose to split them and use the drill-between-the-pistons approach to unify the brake fluid input. There was no forcing required, and the caliper halves came apart quite easily. I don’t really understand the worry that some people have about splitting the calipers. As David Kerr puts it in his step-by-step instructions: “I think a lot written about brakes is folklore, people will not touch brakes simply because they are afraid of the consequences. The faces of the caliper are machined flat, as long as the matched pair are reunited, there really shouldn’t be a problem.”

There isn’t much reason to present yet another step-by-step instruction set for the Volvo caliper conversion, since this road has been well travelled before. See the following: 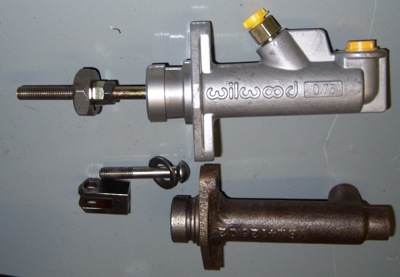 In short, there is plenty to read and learn before even ordering a part.

The Dunlop master cylinders were pretty rough when we pulled them off the car. One had already been resleeved and the sleeves were in pretty decent shape, but they were rusted and ugly. The rubber parts needed a refresh, of course. Over the years, I’ve read about troubles with these cylinders leaking, with the rubber rebuild parts being suspect of either premature deterioration or being ill fitting to begin with. In short, I wasn’t particularly wild about putting the old ones on even after a careful rebuild. I moved from an initial plan of rebuilding on my own to sending them out for a complete and professional redo. 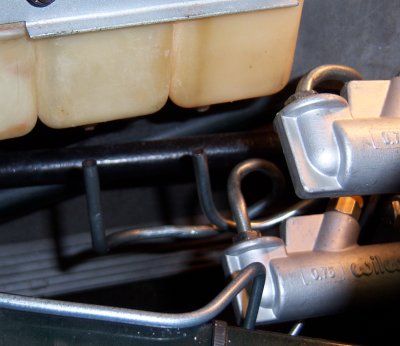 So, I did what everybody does. I googled.

There wasn’t a straight swap for the Dunlop master cylinders, but I ran into some decent specification for a Wilwood master cylinder that could be “drop-in” along the lines of the Volvo calipers. The lines wouldn’t work without some fiddling. The mount into the pedal box required a minor swipe or two of a grinding wheel to open up the hole to accept the mouth of the cylinder. The “plunger” that attaches to the pedal assembly also required a fair amount of work — basically, the plunger for the adjustable fork had to be tapped further, and the other plunger from the original Dunlop needed to be used on the other master. This meant removing the circlip and making the swap. I bought two of the Wilwood 3/4 inch bore “compact remote” aluminum master cylinders (P/N 260-6089) from JEGS (http://jegs.com).

The Wilwoods are aluminum, so they’re lighter than the Dunlops and a bit stouter. The orientations of the inlet and outlet are also different. Where the Dunlop has the inlet coming straight out the back, the Wilwood orients the inlet vertically. The outlet for the Wilwood is shifted to point 45° forward. The threading is the same, however, so you can reuse fittings. Also, the Dunlop master cylinders orient the outlet vertically once they’re installed in the pedal box; the Wilwoods point the inlet and outlet 45° towards the center of the car. It’s worth noting that the Wilwood master cylinders are very similar to the standard-issue Girling clutch master cylinder, with the exception that the Girling is a bit shorter.

This tilt of the inlet and outlet makes for some interesting line-bending maneuvers. I decided to send the brake lines low — obviously, the line heading aft had to go low in any case, but the line heading forward could have been kept above the master cylinders. Sending it below, I think, allows more flexibility and provides some measure of vibration absorption. This meant that all the lines — inlets and outlets — had a bit of crowding beneath the master cylinders. Accommodating the inlet lines from the brake fluid reservoirs turned the lines into a well tied knot, it seemed at times. But they finally fell into place.

So, with the master cylinders in place and the Volvo plan, what’s left? Due to another unfortunate event, my air compressor needed fixing, and so the installation of the the left-side caliper was stopped. I still have to run the lines for the clutch hydraulics, too. But when those are done, the thing can run down a back road, even though it’ll be loud without an exhaust system. I told Neil Purves that they plan was to get the old car moving before the summer ended. It will run up the gravel road behind my place up to “Froggy Hollow” and back.

I just need to cordon off the time to get the last bits in place.

In the earlier part of the year, I finished making a buck for making a Plexiglas rear windshield for my hardtop. I haven’t tried creating a windshield yet, but Ray Livingston suggested that I use an infrared heater and heat slowly. My impatience with the process has made my initial experiments little bubbly disasters. I suppose I’ll give it a go this fall. I just have to make a wooden support for my heater. That’s about as fancy as I’ll get with the windshield. If this doesn’t work, I’m off to the store to buy one. Enough fiddling.

I’ll try to be better about updating, though I know I’ve said that before. Thanks to all of you for your emails over the past several months.