First, a larger picture than I usually post. I beg forgiveness for the size of the shot, but I figured the compressed GIF image sacrificed too much accuracy in color. Fatter JPEG format will do. 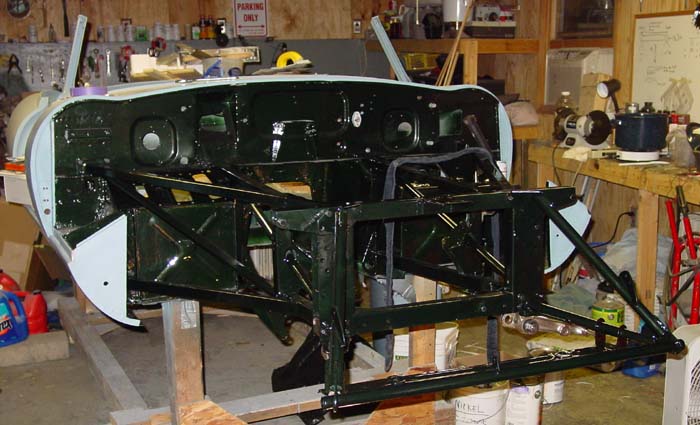 The picture shows the color a bit more clearly than the previous shot did, but still the photograph doesn’t quite do opalescent dark green justice. It is indeed more fiery than the flat web browser allows.

You can probably see the strategy I am taking in rebuilding and spraying color. I am holding off with exterior sections of the car until the internal sections are more or less complete. This has the upside of allowing me to get a little better with the spray gun before I attempt shooting color on the parts of the car that are most easily seen — and therefore more sensitive to my ineptitude with the sprayer. It has the downside of making any painting a big deal, since everything needs to be masked and cleaned and fussed over. Doing the entire job in one fell swoop would be more efficient, perhaps.

But if I were worried about efficiency, I wouldn’t be restoring this car, now, would I!

The primed front frames were sprayed with sealer and then color was applied. They were sprayed separately and then assembled onto the firewall (front bulkhead). I had replaced most of the bolts and nuts with grade 8 hardware, replated with zinc and then treated with zinc blackener. The effect is quite nice. I decided to give the blackened zinc a try in spite of the hours I had spent doing the nickel plating the front suspension parts. The additional protection was nice, but using correct color bolts convinced me.

As a small aside, I should add that I have been seeking opportunities for practice with the spray gun. Well, sometimes they have found me, too. The boys managed to wreck the 1995 Dodge Ram pickup so that the insurance company totalled it — it doesn’t take much to total an old vehicle, even a truck. I settled for enough to get another old pickup (a Ford F-150) and I decided to keep the Ram. We fixed it with some pulling and sanding and new parts, basically the driver’s side front end. Mechanically the old thing is still in great shape, and the frame wasn’t harmed by the accident. This turned out to be a great opportunity to practice painting. It was, unfortunately, as hard as I remembered. The old truck looks good from 20 feet, but you do see a couple of runs if you stand much closer.

Oh, well, so long as it doesn’t happen on the Jag….

Never underestimate the power of tools that aren’t quite suited to the purpose.

I managed to let both of the good circlips fly off into the netherworld. In the vain hope that cleaning might scare up one of them at least, I grabbed the broom and swept the garage. No clip appeared. The second one flew off after I had opened the garage door to let light come in so I could search for the first lost circlip. Of course, it flew off into the rose garden and grape arbor with a sleek and fast zing. I told Aaron he could grab his metal detector and search, but he wasn’t motivated.

McMaster-Carr came to the rescue, and I will be expecting a box of 25 circlips sometime early next week, I suppose. That should give me enough circlips for, well, another eleven cars. Anyone need a circlip cheap?

Besides this little annoyance, there are others. I’ll be compiling tips for installation of the front suspension parts to publish later, probably in the next entry. It turns out that order of rebuilding and installation matters a bit, but it’s not complicated.