New engine! —New, at least for me

Very exciting! I picked up an engine to resolve the issues of the thrust washers and crankshaft. This one is a 4.2 liter XK from a 1979 model year XJ6. I used the free advertisement section of Jag Lovers to track it down. David Boger lives a little over two 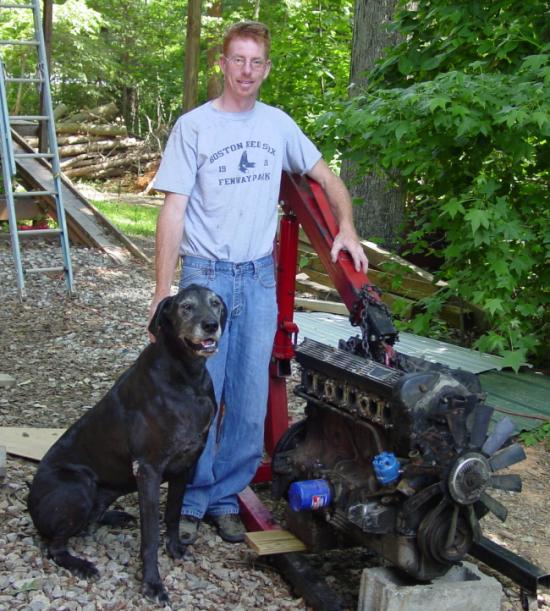 hours down interstate 85 from me, and so it was an easy pickup after we made the deal.

The engine is basically the same as the one that came out of my car, except that it was fuel injected (I didn’t need that) and a 4.2 liter. The water pump and belting is a little different, and (as the picture shows) the XJ6 has a fan attached via the water pump. It also has an electronic ignition, which I will keep. The block itself is configured a bit differently for the XJ6, since it uses the E-type engine mount points for the power steering pump (and something else on the other side). The XJ6 engine mounts are set a little further back. The nice thing is that you can still use the E-type mounts in their appropriate places — just remove te brackets for the other stuff and stick in the engine mount brackets. The cylinder head has a couple of extra holes for coolant, and some subtle changes that are less of a bother, probably. (See below for information about the head.) David provided the XJ6 exhaust manifolds that I’m going to try to use. The originals I have are fine, but I like the XJ manifolds, and I’d like to keep the heat shield in place, since damage to the bonnet paint over the manifolds has been reported.

David has about a dozen XJ6’s in his collection of parts cars, ranging from series one through three. He has a series one that looks like a good candidate for restoration — a right-hand drive model with some interesting details. It was damaged a little on an outer sill, but that was a pretty easy repair, I thought. He’s working on another XJ that’s perched on the ramp that you can barely see in the background of the picture. Instead of an XJ6, this one is an XJ12, with a front end full of metal. I don’t know what his ultimate plans are for the car, but it’s a good project. I think it would take me a long time to take on a V-12, though it would be fulfilling to complete … until you have to pay for the fuel, of course.

I walked his grounds, visited his horses, met his wife and 22-month old daughter. I determined he was a good man to buy an engine from. I certainly know where I’ll be able to find E-Type parts that might be interchangeable with the XJ series. And, seeing those old XJs made 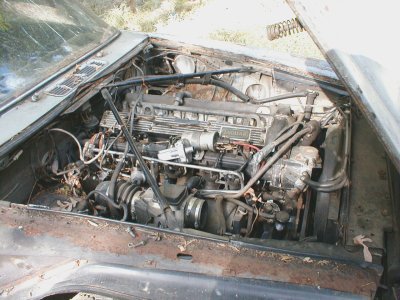 me wonder if I should try my hand at one of those eventually. I have an XJ8 (I think they call it an X308 model, or the like) now, and it’s a wonderful car. The earlier version XJ6 series has the same glove-like, natural quality. The interiors of David’s cars, though most of them were worn out, still had that Jaguar feel. In my opinion, the XJ6, series one through three, were nice cars, but the following boxy ugly version of the late 80s seems to have lost its way. Jaguar found the path again with the XJ model that currently is offered, I think.

He walked me to pay homage to the donor car, which sat at the end of a row, sans rear suspension, front end akimbo, left front panel gone, lights poked out — all probably mounted on other rides somewhere.

David is a square dealer, and he offered me the history he had of the engine and its donor car, telling me what did and did not work. He lives near Rockwell, North Carolina, which is not too far from Charlotte. He’s probably most available by email: david@everydayxj.com. I’m adding him to my list of suppliers, since there do seem to be useful overlaps of parts between the E-type and the good old XJs. [Added 20 January 2008: David has a website now: http://everydayxj.com.]

It’s been striking to see how much the early E-type engines were ornamented. The engine block from the XJ6, cast and fitted during the dread British Leyland years, was crudely sprayed a faded blue. The cylinder head on our old cars were painted gold and the area covering the timing chains was smoothed and polished, or at least brushed. The XJ6 head was barely extracted from the sand after it was cast and then 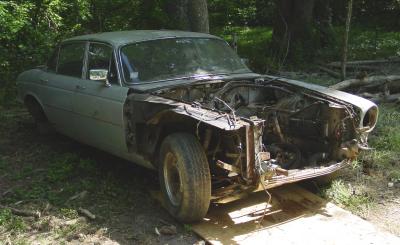 quickly gone over with a grinder to remove casting seeps. and seams. No cosmetics in the late 70s, I’m afraid.

In short, the cylinder head was a bugger to get off. The head bolts had corroded, except for the pairs on each end. I guess this is quite common. I first thought that the head gasket was giving us the trouble, but quick taps of the bolts (with head nuts fittted, of course) quickly told us which ones were locked tight. They were the ones that didn’t budge or rattle in the least. Aaron squirted bolt loosener (PB “Blaster”), and that seemed to help a bit, and we made tiny headway to free the corroded bolts.

But a quick search on Jag Lovers brought up references to a “bottle jack” method that appeared to be quite effective. I have to admit that I was a little baffled, but at least I had a couple of hydraulic jacks. They have done various and good service on everything from cars to ninety-year-old floor spans. Why not on a cylinder head, too? When I was sitting at the computer, I had no idea where the things would go, but with jacks in hand and kneeling next to the engine, it was apparent.

The underside of the head juts some way out from the top of the block, and the block itself has a shelf-like flare near the bottom. The jack sits between these points. The picture tells the story, at least in part. 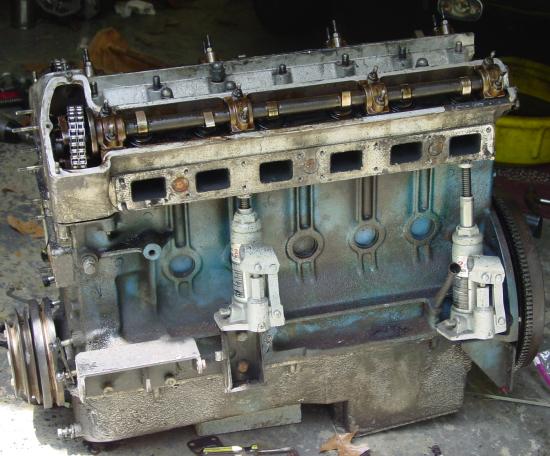 I think that if you have four hydraulic “bottle jacks,” you’d have the best luck. I had two, and Aaron and I were constantly shifting them to push the head off more-or-less straight. I was worried that with too much uneven pressure the head could be damaged or the bolts even more fixed in place. If you had six jacks, you’d probably be able to take off a stubborn head with very little trouble. I would do one thing differently, I think. I would probably situate a stout angle iron under the head before applying pressure. That would spread out the pressure and eliminate any marks from the top of the jack. However, you would have to make sure that the pressure from the jacks would be going slightly inward. Otherwise the angle iron could pop out — perhaps dangerously, given the pressure that can be exerted.

I had intended on detailing the differences between the 1963 and 1979 cylinder heads in this entry, but I think I’ll delay that a bit, since we hurried the head to the machinists. When it comes back all fit and shiny, it’ll be a better example to look at in any case. I hope that the next entries might help some other restorer do a similar transplant.