I’ve been picking away at the engine. The cylinder head has gotten a clean bill-of-health after inspection, pressure testing, and a shave. The SU carburetors are cleaned up, though not quite ready since replacement parts are needed. Bores are all measured, and they have little wear from the last rebuild, when .030-upsized pistons were installed. I have debated whether I should just go ahead and have new sleeves fitted and go back to the nominal bore of 3.4252″. Since the current bores are still in good shape, I think I’ll wait to do the more thorough rebuild. I’ll fit new rings on the old pistons.

Obviously, the question in my mind now is whether the crankshaft is salvagable — or, for that matter, the block.

Face on block. It’s a little oily and dusty but at least not rusty. The side of the bearing seat shows a semicircular groove cut into the metal. This groove is about at the outer edge of where the thrust washer fits. You can see that the impact of the crankshaft created a ridge of crushed metal on the face that accepts the crankshaft bearing. 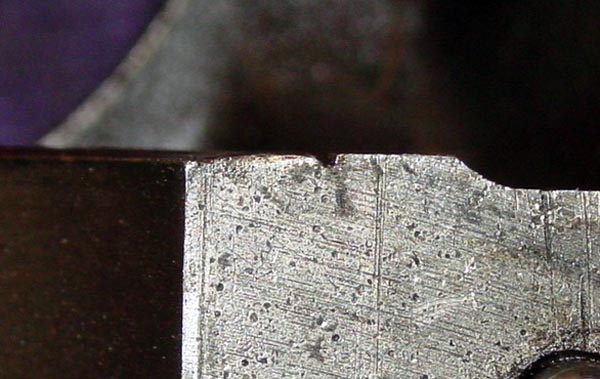 Bevel on block. At the center of the picture it is apparent that the friction from the crank absent a thrust washer has ground the face into a slight bevel. This should be square, especially since the area serves to hold the thrust washer. This damage might not be that recent, actually, since it might be the reason why the thrust washer fell out. A relatively recent rebuild might have fit a new thrust washer in the damage section without repairing the damaged faces. The thrust washer we took out were beaten up by being loose, but they did not look particularly worn. The groove is easily seen, of course.