I read an article in Auto Restorer that claimed that molasses was a cheap but slow rust remover. I decided to give it a go, since I’ll have some rust to remove soon, and I do have some miscellaneous items that could bear a bit of a spruce-up and even some replating. 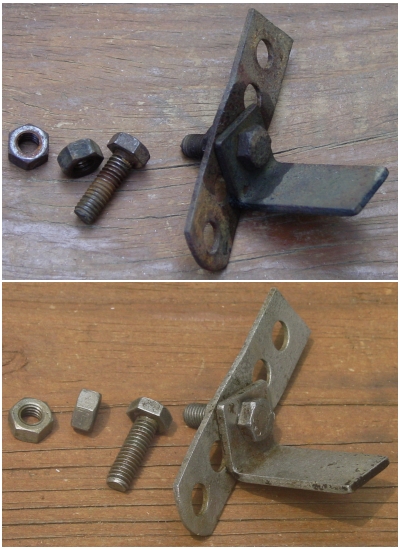 The test piece was a bit of metal that attached the exhaust resonators to the bracket. It was mostly a makeshift piece, but I did want to retrieve a GKN bolt from the assembly. The rest was just plain rusted and not destined for much other than the waste bin.

The article said that any molasses would do, but that the kitchen variety is a bit expensive. The virtues of this method is the lack of expense and the fact that you use materials that are not hazardous. If I go into this in a bigger way with other parts, I’ll probably use livestock feed grade molasses. I checked with our feed supplier (Wallace at Triangle Farm and Home down the road), but he doesn’t stock molasses, he said. I expect that the bigger farm supply north of us in Roxboro would have it. The recipe is simple. Dilute with between four-to-ten parts water for every part of molasses.

I used the Brer Rabbit brand we had on hand in the fridge, and diluted it to maybe about 6:1 water to molasses. I used dishsoap and water to remove what little oil and grease might have been on the parts (the top photograph was taken after the cleanup), and then I threw the parts into the molasses-water mix. That was on 25 June. I checked the parts midway through the week, and the rust had just begun to give way. I used a scrubbie pad to brush off the loose rust and popped the pieces back into the mixture. I did notice that the mixture had a foamy head, and I thought that perhaps the brew was beginning to ferment. It didn’t smell yeasty, though. Whenever I ran out to the garage, I gave the container a shake. By the weekend, the froth had faded, and it consisted of lines of tiny bubbles aligned, I assumed, above the parts. I suspect that whatever chemical reaction was taking place on the parts gave off a slight amount of gas.

On Saturday, 1 July, I used a wire brush on the parts, and it was clear that the molasses had done a job on the rust. Most of surface of the parts were rust free, and when I rinsed them and dried them, flash rust appeared alomst immediately. I left them in the mix until Monday, for a total of eight days of steeping.

The rust was almost entirely gone. I retrieved the GKN bolt with ease and put it aside.

I’ll be doing rust removal on the exhaust manifolds prior to getting them coated with whatever I finally decide, and I’ll use the molasses treatment. I went ahead and threw some rusty parts into the mix immediately after retrieving the test pieces. This process seems much safer for the environment (it’s said you can dispose of exhausted molasses mix on the yard!), and it is far less aggressive than other methods. The molasses mix should work for a while, but I don’t have enough experience with it to see whether the mixture just ages or whether the molasses mix simply gives out after treating a certain amount of rust.

Since rust removal is a constant concern of car restorers, I thought I’d pass this information on, devoid as it is of Jaguar E-Type specifics.