As a side note before launching into depictions of the 3.8 and 4.2 heads, I discovered in my reading that Jaguar wasn’t the first to have bored out the 3.8 (or, maybe, the 3.4) liter engines to 4.2 liter displacement. It was reported that race teams had done so well before Jaguar decided to bore the XK to the max. If that was the case, I think Jaguar’s design for the 4.2 paid more attention to cooling than a race team could have. The major differences between the 3.8 and 4.2 liter versions of the XK seem to me to concern cooling.

Essentially, the cylinder heads are the same with the expected differences from the placement of the bores for the 3.8 and the 4.2 liter displacement. It’s quite apparent that the XK block couldn’t have gone any bigger than 4.2 liter, by the way. The bores are tight. The cylinder heads differ in the way that they handle cooling, though.

On the intake side, the XJ6’s 4.2 includes additional holes for coolant to be passed to the manifold. These holes may well be in the 3.8 head, too, though they seem to have served as a way of clearing the casting before they were plugged.

The only physical alterations to the 1979 XJ6 cylinder head were plugging these coolant holes with Dorman plugs (number 555-020) and removing an emissions control device (see below). Otherwise the head looks to me to be quite close to the earliest 4.2 and 3.8 liter versions perhaps except for some coolant holes at the rear and a somewhat stouter casting in the front timing chain area. Of course the machining was also slightly different for the hemispherical chambers for the differently sized engines, but the external intake side was similarly machined to accept the intake manifolds, one piece for the XJ6 and three-piece for my SU setup.

XJ6 4.2 liter head, intake side. The two round coolant holes were already plugged with Dorman 555-020 inserts before I took this picture. With the exception of those open holes, the XJ6 head is machined the same as the 1963 3.8 liter head.

The top of the 1979 head sports six holes on the plane where the spark plug holes are located. They sit on the left side of that surface and are positioned between the holes for the left-side head bolts. These holes are for an emissions control device, lines for which attached to a manifold and had an attached heat-deflecting barrier. I’ve been told that this emissions device is commonly removed on XJ6s of the time and the holes plugged. Actually, when we removed the lines and the fittings from the head, they were hopelessly plugged with grime so I doubt they served any purpose. The holes led into the exhaust side of the head. They might simply have been intended as a means of speeding warm-up.

The three plugs on the XJ6 head were unbranded Dorman-like inserts. The 1963 3.8 head used bolts to do the plugging. I believe these holes were for clearing the cast. The 1963 head gives the impression that the bolts do some reinforcement work, and even if they did not, the process of threading the holes for these inserts (and, for that matter, for the holes on the intake side) must have taken some time and care. Certainly that required more work than inserting plugs into the XJ6 head.

XJ6 4.2 liter head, top view. No paint on this one, and as a matter of fact very little worry about appearances. Grinder marks were plainly visible. Note the plugs in the three cast clearing (probably) holes and the emissions control device holes offset from the spark plug holes. Otherwise, from the top the 4.2 head looks just like the 3.8 liter E-type head.

E-type 3.8 liter head, top view. The gold paint is a bit taken off from the head cleaning, but the polished aluminum and the paint dress up this head. Instead of pressed in plugs, threaded bolts fit into the three holes along the head. Otherwise, there’s not much besides the emissions device holes on the 4.2 liter head to distinguish this one.

Bottom’s up, the head is nice and true, just back from the machine shop. At the rear end of the head, there is a major difference from the 3.8 head. The 4.2 liter head has two coolant holes that appear in an extension of the cast, at least when it’s compared with the 3.8 liter head. The 3.8 liter head more or less has a flat rear wall, while the 4.2 liter head flares out as it meets the block. Of course, the bore locations vary between the 3.8 and 4.2 engines. The XJ6 head has twelve additional coolant holes that are inset more to the midline of the head, fore and aft. These small holes roughly meet the block where a machined cut sits between the bores. Coolant going through those cuts certainly was effective and the cuts themselves probably allowed for expansion in the metal between the bores. (I’ll probably take some pictures to illustrate this difference when I muster up the strength to move the 3.8 block around a bit.)

The 4.2 liter head also cut pairs of coolant slots in the outermost positions adjacent to the bores. I’m not exactly sure what the purpose of that was unless to strengthen the face a bit. The 3.8 liter head has large single slots in the same position. The 4.2 liter head looks a bit beefier. Walls are thicker in the front, and the hole sizes are smaller, yet there seems to be more coolant flow possible, and more directed flow at that. I’ve not weighed either head, but I’d bet the 4.2 would be noticably heftier.

XJ6 4.2 liter head, bottom view. The bottom is the most different from the 3.8 liter head, in that the coolant holes are more numerous both in real numbers of vents and by the addition of the two new vents at the rear and ten holes near the bores. It seems obvious that the engineers paid a fair amount of attention to cooling the 4.2 liter engine. In comparison to the 3.8 liter head, the aluminum casting is a little stouter, as the walls at the front timing chain cover show.

E-type 3.8 liter head, bottom view. In comparison to its larger brother, the 3.8 liter head seems simple in design. Where the 4.2 liter head split long slots into two, the 3.8 let the casting have long coolant slots adjacent the bores. The small, near-bore coolant holes on the 4.2 are absent here. The casting is a little thinner on the front, and on the back wall of the timing chain cover, a small “V” is grooved in front of number six cylinder. 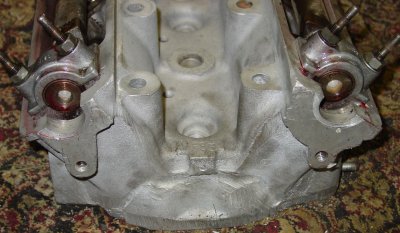 XJ6 4.2 liter head, rear view. Note the bulge and the extra aluminum in the casting at the very end. This bulge is where the additional two coolant holes fit. The rear end of the cam areas are a little different.

The extra metal on the rear end of the 4.2 liter head is easiest to see with the two heads side-by-side. This extra bulge is practically unnoticeable from the top, since it only flares out from the back face of the head about an inch from the base of the head. I don’t know exactly where the coolant goes within the head itself, especially since the internals of the castings are both quite airy — filled with voids at least. The two extra coolant holes that the extra metal allows must have served the coolant needs of the head itself, however. The holes are actually quite well removed from the cylinders in the block, and I have assumed that the flow from these extra holes would have be down from the head, probably originating from areas nearer the cams than the valves.

You can see one challenge in the new head — it doesn’t have holes for the bolts attaching the tach generator or serving to block off the end of the cam area. On the XJ6, the lower semicircular void was fit with a rubber plug, and the value covers lacked any semicircular cutout. If I refit the tach generator, it would probably be merely ornament in any case, since the cam end won’t drive the generator, I believe. I might drill and tap the holes, though. I don’t know if I want to put up with a make-do plug. 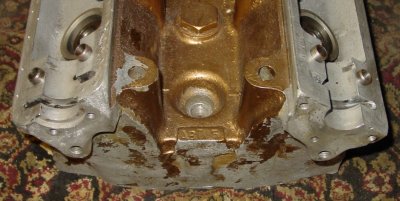 E-type 3.8 liter head, rear view. No extra metal here. The head ends straight off the back. Note the threaded holes to fit the tachometer generator (right side) and the hole cover (left side). The area around the cams are more subtly cast than in the 4.2 liter head.

I have an intake head gasket from the 3.8 — it looks to me pretty much the original, since it’s as thin as could be. And I have a new head gasket for the 4.2. I have yet to compare them, except in the most cursory fashion. The new gasket is considerably thicker, with metal rings fitting the holes for the bores. I thought about asking Ray Livingston for his special spreadsheet to determine actual displacement, but I wonder if it would apply on this engine. This one has 8:1 pistons, I’m almost relieved to say. Even with some shave off the head, the compression shouldn’t exceed 9:1, and least by much, and I’ll be running premium gas anyway.

Aaron got the upper end and bottom end gasket sets for me, and when I can retrieve a few tools from neighbors, I’ll be setting things back to rights. Terry’s Jaguar Parts is sending the last bits (as far as I know) and a cam setting tool. So, we’ll soon be good to go.

I’m hoping that the next entry will do the same job on the block and its accessories. I have learned that some 3.8 E-type elements will need to be refitted on the engine, and the oil filter fitting that I was happy to see on the new engine might actually prove to be a bit of a challenge.